Thouless' quantization of adiabatic particle transport permits one to associate an integer topological charge with each atom of an electronically gapped material. If these charges are additive and independent of atomic positions, they provide a rigorous definition of atomic oxidation states and atoms can be identified as integer-charge carriers in ionic conductors. Whenever these conditions are met, charge transport is necessarily convective; i.e., it cannot occur without substantial ionic flow, a transport regime that we dub trivial.

We show that the topological requirements that allow these conditions to be broken are the same that would determine a Thouless' pump mechanism if the system were subject to a suitably defined time-periodic Hamiltonian. The occurrence of these requirements determines a nontrivial transport regime whereby charge can flow without any ionic convection, even in electronic insulators. These results are first demonstrated with a couple of simple molecular models that display a quantum-pump mechanism upon introduction of a fictitious time dependence of the atomic positions along a closed loop in configuration space. We finally examine the impact of our findings on the transport properties of nonstoichiometric alkali-halide melts, where the same topological conditions that would induce a quantum-pump mechanism along certain closed loops in configuration space also determine a nontrivial transport regime such that most of the total charge current results to be uncorrelated from the ionic ones. 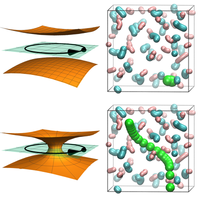